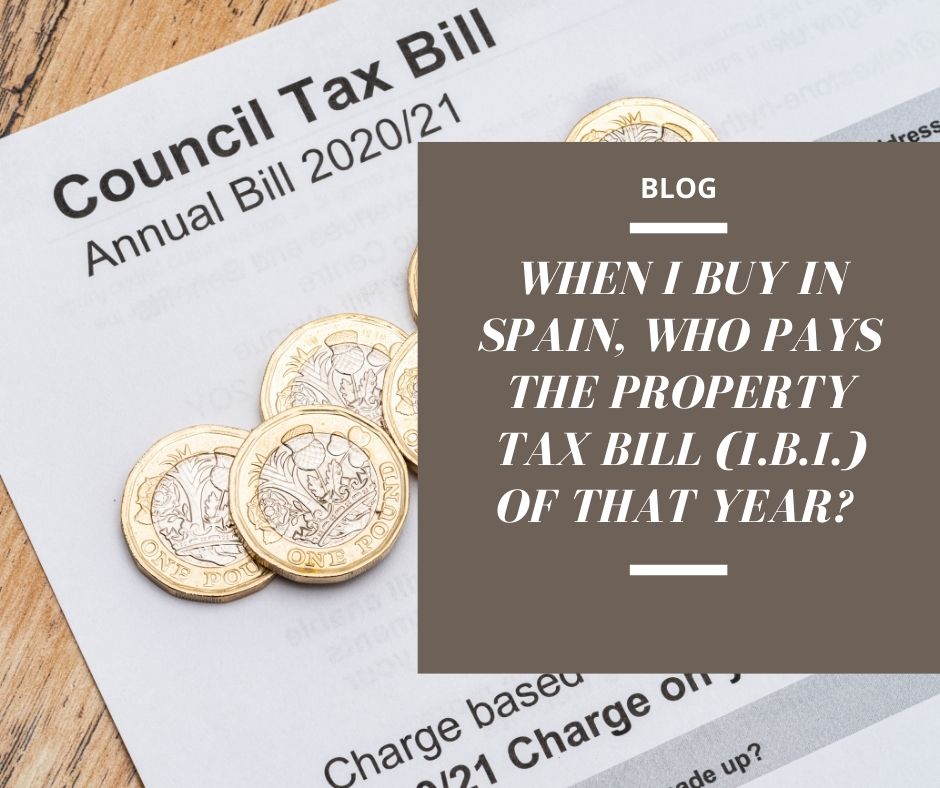 1.-WHAT IS THE TAX ON PROPERTY AND RUBBISH COLLECTION (Rates bill)

2.- WHO IS LEGALLY OBLIGED TO PAY THE I.B.I. PROPERTY TAX AND RUBBISH BILL.

4.- THE BEST ADVICE I CAN GIVE YOU

1.- WHAT IS THE TAX ON PROPERTY AND RUBBISH COLLECTION (Rates bill)

IMPORTANT: Do not confuse the I.B.I. or rubbish collection tax with the non-resident’s tax (210) which is a STATE levied tax.

The I.B.I. and Rubbish Collection taxes are levied by the TOWN HALL.

THE NON-RESIDENT’S TAX (210) AS WELL AS THE I.B.I. AND RUBBISH COLLECTION TAXES ARE PAID YEARLY.

As is the case in the majority of countries (RATES BILL IN THE UK), this tax is a tax levied by the Town Hall of the place where your property is located.

It is a tax that, in most municipalities and cities, is a paid annually, although it is true that in recent years most of the Town Halls collect it in two different periods, dividing it into 2 instalments.

In order to try to collect the funds as quickly as possible, the municipalities normally issue the bills for payment via ordinary mail to the owners.

These bills are based on the list of proprietors that appear in the cadastre on the 31st of December of the previous year.

PLEASE NOTE 1. Although nowadays the process of changing the ownership in the Cadastre has improved and is usually very fast, sometimes it is done at the time of signing the deeds at the Notary (carried out by the Notary), however, there are cases in which said change in the Cadastre is not carried out, this means that the bill will still be issued in the name of the previous owner.  In these cases, make sure that the bill reaches you (either by asking the former owner for it or by going to the Town Hall in question to request it in person, or through your lawyer).

PLEASE NOTE 2. As I have already told you, the Town Halls, with the intention of collecting all of said taxes, send the documents by ordinary mail to the homes of the owners. However, some may not arrive.

Bear in mind that there is no LEGAL OBLIGATION TO NOTIFY YOU OF THIS TAX. This means that even if you do not receive it, it is your obligation to obtain said document from the Town Hall and pay it.

So if you do not receive it within the normal payment period (TIP: on every Town Hall webpage they usually have a payment schedule for these taxes. See example LINK), go to the Town Hall and ask for your payment document. They will be more than happy to give you the tax bill so you can pay it.

PLEASE NOTE 3. If these taxes are not paid, the Town Hall in question has the possibility of embargoing said amounts directly from your current account in the bank with the corresponding surcharges. It is one of the privileges that the Local Administration has in Spain.

The calculation of this tax is a really complex formula that we are not going to explain here, especially when there is a huge number of variables that differ depending on each municipality.

Once you receive the bill or tax payment document, you can go to your bank and pay it from your account (it can even be paid via online banking).  But better still, you can also pay the following bills by direct debit, and then the only thing you have to worry about is making sure that you have enough funds in your account to meet the payment of the tax.

Advice: set up a direct debit for the I.B.I. bill and forget about it every year.

RUBBISH COLLECTION AND OTHER LOCAL TAXES. All the above information that I have given you about the I.B.I property tax, applies to all the taxes levied by the Town Hall, among which the DOMESTIC RUBBISH COLLECTION TAX stands out. This tax is calculated in a different way, in fact each Town Hall has a different formula of calculation. But in essence, the same system is used to collect payment of this bill as is used for the I.B.I bill. 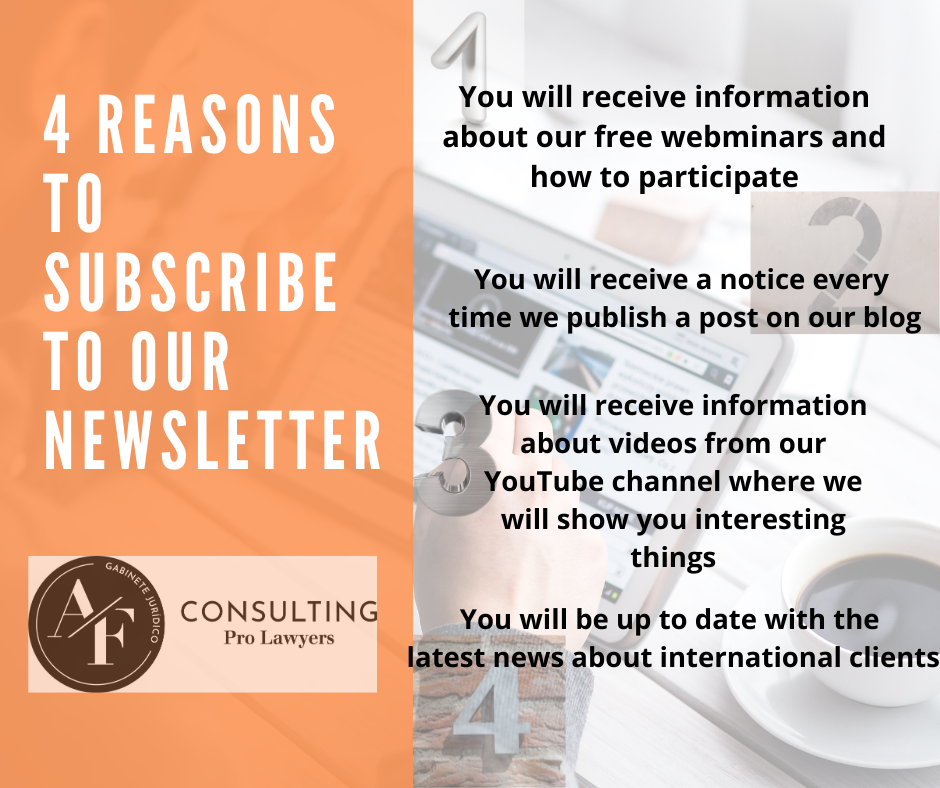 2.- WHO IS LEGALLY RESPONSIBLE TO PAY THE I.B.I. AND RUBBISH BILL?

If you have ever wondered who is responsible for paying the I.B.I., the answer is clear. Who owns the property as of December 31st of the previous year is responsible (therefore the I.B.I. of 2020 will be paid by whomever appears in the CADASTRE as the owner on that day).

Therefore, you have to bear in mind that the municipalities will generate the bills in the names of these people.

But what happens if, as is normal, you buy at another time of the year that is not December 31st.  Read the next point.

3.- AND IF I BUY IN THE MIDDLE OF A YEAR, CAN I PAY PROPORTIONALLY?

It has become common practice that when a purchase occurs, the parties agree that said tax is paid in proportion to the time that each of the parties will be the owner. For example, if you buy right in the middle of the year, it is usually agreed that the seller pays half, and the buyer pays the other half.

The Spanish Courts have already given the possibility of paying proportionally its blessing, in such a way that there is now no problem with the parties agreeing between them.

However, how do we handle it? You have to think that the Town Hall has already generated the bills on December 31st of the previous year and therefore it will not issue new bills if the property is sold.

The best way to understand my advice is through an example.

Imagine that the purchase takes place in MARCH.

Well, it is possible that the bill has not yet been issued by the Town Hall. Therefore, it will be necessary to do the calculations of how much corresponds to each of the parties (seller and buyer).

All this will have to be done before going to the notary’s office, so that said figure is calculated before signing and therefore, the parties have already prepared the funds for it that same day.

If you are a seller, you will be interested in the buyer giving you the corresponding part on the day of the signing of the deeds, and that you take charge of paying it in full, since if not, it could be the case that if you give the money to the buyers, they won’t pay it… and here comes the problem.

If the buyers do not pay it, the Town Hall is not bound by your private agreement, so it will go against the person who appears as the owner in its files to collect the debt, and therefore, seize said amount with surcharges if necessary.

And if this happens, you would have to up against the buyer to claim that amount (with the significant headaches that this can cause).

But what if you are a buyer? Well, in this case, the best strategy would be the opposite.

That the seller pays you their corresponding part and that you take charge of the payment of the bills. But BEWARE: you will have to be very attentive to obtain them, because these bills will be generated in the name of the seller, and in the event that they do not arrive by post at the address, you will have to ask for them at the Town Hall.

Imagine that you give the money, corresponding to your part of the bill, to the seller and as is often the case, he will no longer be residing in Spain after the signing. Imagine that he does not pay it and you have to claim back the amount from him.

I believe in having faith in all people, but believe me when I tell you that what I describe is a situation that I have personally witnessed on several occasions.

FINALLY, my advice is that you leave this type of procedure in the hands of your lawyer. Mark my words when I tell you what a headache it is having to be on top of all of this and that what you pay your lawyer is more than justified. He will make sure that in one way or another, the tax stays paid and therefore there are no reclamations against you in the future. 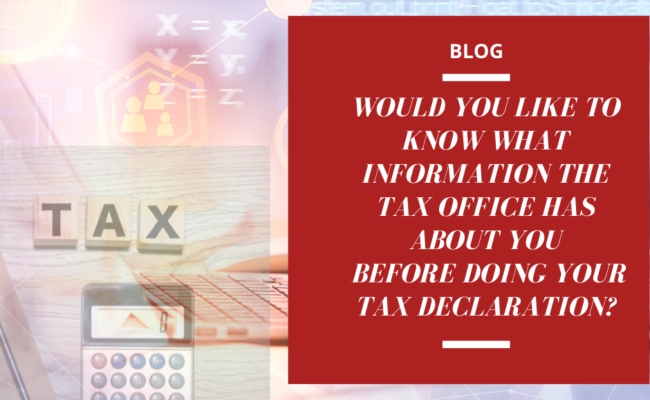 WOULD YOU LIKE TO KNOW WHAT INFORMATION THE TAX OFFICE HAS ABOUT YOU BEFORE DOING YOUR TAX DECLARATION? 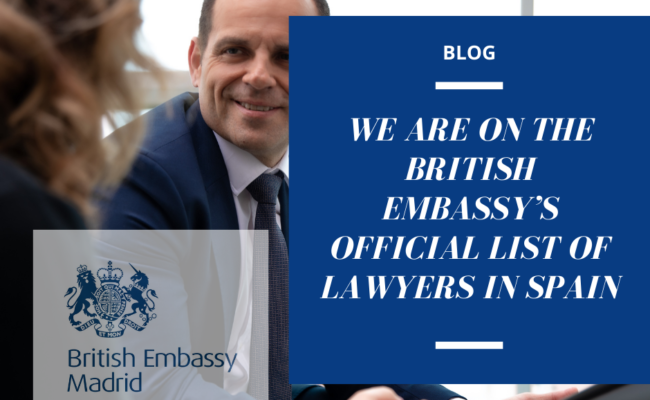 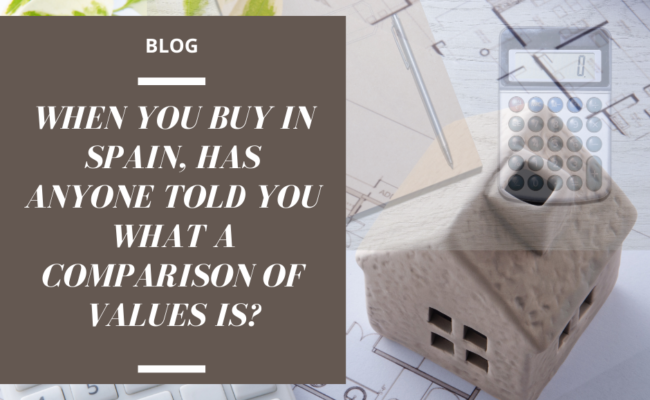 WHEN YOU BUY IN SPAIN HAS ANYONE TOLD YOU WHAT A COMPARISON OF VALUES IS? 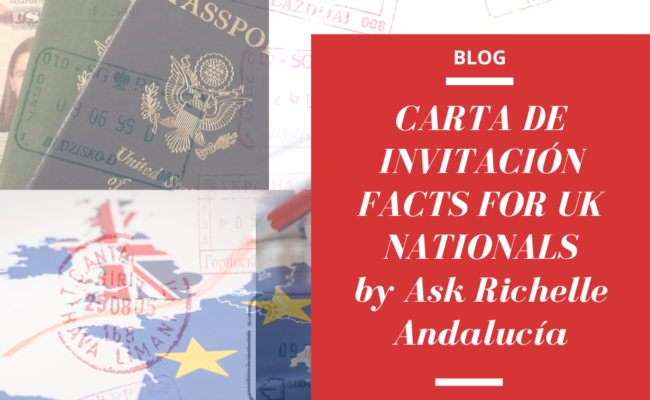 AF CONSULTING has been a beneficiary of the European Regional Development Fund whose objective is to improve the competitiveness of SMEs and thanks to which has launched an International Digital Marketing Plan with the aim of improving its online positioning in foreign markets during the year 2019. For this it has the support of the XPANDE DIGITAL Program of the Cámara de Comercio de Motril.

A WAY OF MAKING EUROPE

We use our own and third-party cookies to improve your experience and our services. If you continue browsing we consider that you accept its use. You can get more information in our Cookies policy.